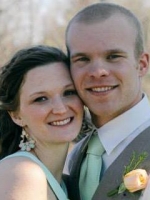 Ben grew up in metro-Detroit and attended Oakland University where he received his undergraduate degree in environmental science. He and his wife, Kenzie, met while serving at Bair Lake Bible Camp before getting married in 2012. Bair Lake Bible Camp hired Ben in 2012 where he spent seven and a half years serving as the Program Specialist and Discipleship Manager. During this time Ben pursued a Master of Divinity from Southern Baptist Theological Seminary. Logansville Community Church hired Ben as the Assistant Pastor in January 2020.